Kites. Beautiful. Colourful. In an array of shapes.  May be because I have seen them only on very few occasions, I have been as fascinated as a little child whenever I see kites soaring in the sky, against wind… lifting it up higher and higher, till they are just a speck in the vast azure expanse and then disappear from the naked eye. Kite flying is also a ritual in many parts of India at Makara Sankranthi – the day when the glorious Sun begins its ascendancy and enters into the Northern Hemisphere; the time from when days start becoming longer & warmer.

As a teacher while teaching Ruskin Bond’s The Kite Maker to my Grade XI students, I got an insight into the life of Mahmood, the kite maker. In the story, Mahmood, the kite maker reminiscences the past and longs for the bygone era when he was treated with great respect and importance. As the pace of life quickened, people had no time or interest for kite flying. Later I was equally charmed by the wonderful tale of Khaled Hosseni in The Kite Runner, his debut novel. To Amir, the protagonist, kite running was a favourite pastime. The kite here is also symbolic of two overriding yet contrasting emotions in Amir – happiness as well as guilt.

To me kites are a metaphor to speak about anything that rises against odds. While I love to see these colourful things in the sky I was rudely shocked when I read about kite flying competitions. In such a competition one kite will cut the strings of other kites and emerge the winner. Wonder how one string can cut another? It is because the string is coated with glass powder! It is reported that earlier we used Indian Manja, made of normal cotton thread, coated with a mixture of rice powder and gum. Then competitions were not as cut-throat as it is now. Everything was done for pure fun.

Now it seems the markets are flooded with Chinese Manja which is made of nylon and coated with rice powder, gum and finely crushed glass powder. This gives it both a firmness and sharpness which makes it difficult to be cut in kite flying competitions. There is a deadlier Chinese version of this made out of wire called Tangus Manja, it seems. The Indian one is costly as it requires hard labour and is time consuming to make. The Chinese one on the other hand is cheap – just half the price of the Indian one.

Even more horrifying is the loss of life associated with kite flying. Children fall down roof tops and terraces while flying them. People travelling in two wheelers have had their throats slit by the manja. Many birds have also been affected – died or injured, courtesy these heartless kite fliers who use deadly versions of the Manja. And mind you, it is winter time. There a lot of avian visitors to the Indian sub continent ranging from Painted Storks to Amur Falcons.

Am sad, beyond words! How can we take pride in being humans with the power to think when we are so callous about other lives? We must ban these pastimes where death, pain and injury lurks!! Or else get back to using normal thread which will not cause any harm. Is that asking too much?

Are you a kite flier? If yes, please do spare a thought for both humans and animals! By all means go, fly your kite… but don’t you take a life!!! 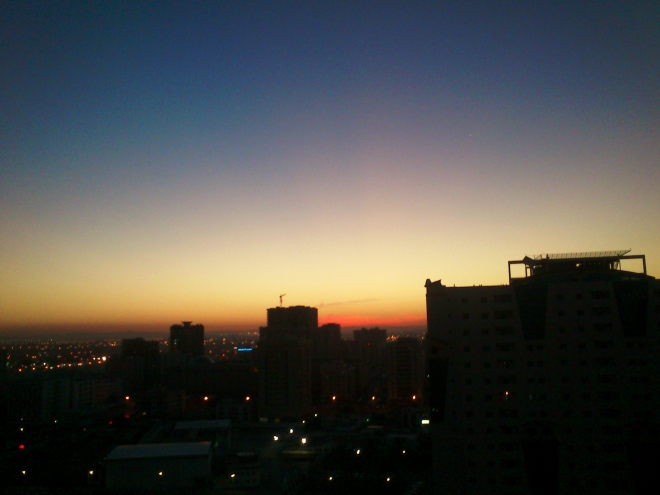 December 21, 2012. The day dawned with much promise with a spectacular view. Being neither a believer nor a sceptic I had no fear or illusions that it is the day of the Apocalypse. Being a holiday, I knew however that I could spend my time in enriching endeavours and nurturing practices. So switching off the phone and the internet, my day progressed in prayer and introspection. After lunch I settled in to watch television.  Half way through the programme I was distracted by some unusual bird calls in my balcony. Normally I have only mynahs and pigeons for avian visitors. This call seemed to be different.

I looked out. My myopic eyes could make out a small green and red tiny bird on my clothes stand. I wanted to get a better view but did not want to scare the birdie. So I moved quietly closer. Thankfully the sliding door was open and I stepped into the balcony.

The bird looked at me carefully. I held out my hand and inched closer little by little. I wanted to gain the confidence of the bird that I meant no harm. It hopped from the clothes stand to the air conditioner. I went in to get some broken pieces of walnuts for the bird. It was still there. Observing me watchfully. But not for long. As I reached out gently, almost touching it, it flew away. I felt very sad. The bird evidently had flown away from its home (read cage!) and seemed disoriented. It banged against the French window of my balcony a couple of times.

My daughter, Aathira, told me that the bird is a Lorikeet. I surfed the net in an effort to find out more about the bird.

The vibrantly hued Lorikeet on my air conditioner’s top

Lorikeets are small to medium sized arboreal parrots. They are mostly natives of coastal areas around the Australasian region comprising Australia, South East Asia, Polynesia, Indonesia and  Papua New Guinea. They have a brilliant plumage and hence are extremely attractive. They live on a diet of nectar, pollen and berries and hence as pets need a specialized diet. This bird seemed to be a juvenile as the beak was ivory in colour. It is when they mature that it turns orange in colour giving it its name – Orange billed Lorikeet or Emerald Lorikeet. These particular Lorikeets are natives to the subtropical and tropical mountains of Indonesia and Papua New Guinea. They are intelligent, entertaining and stunningly beautiful birds.

It made me very sad to see the bird fly away. If it does not find its way back to its home, it might not survive. Which brought me to the crux of the problem. Why do people want to have birds as pets in cages? A bird becomes one only when it is free to soar into the blue sky and fly around seamlessly. We moan and groan, gripe and whine about our freedom when it is curtailed. We make such a noise about our loss of freedom. It would be worthwhile to keep this in perspective when we cage birds – well, it could be even equal to sentencing the bird to death!

Birds in cages suffer from malnutrition, improper environment, loneliness and stress due to confinement according to People for the Ethical Treatment of Animals (PETA). The New York Times has reported that many birds “go off the deep end when they are … placed in captivity. … The resulting frustration, [Cambridge University zoologist Dr. James Serpell] said, leads to abnormalities like repetitive behaviour  in which the bird’s head weaves back and forth, or in which it shifts constantly from one foot to the other; abnormal grooming in which the bird picks out all of its feathers, and aggressive behaviour.”

I fondly hope and pray my little friend has safely reached it cage!