Freedom in Exile is the autobiography of His Holiness the Dalai Lama. I had read this book five years back but felt drawn to it again. The Dalai Lama has always captured my attention as a revered spiritual leader. A keen interest in Buddhism which was cemented by experiencing and practicing Vipassana (a meditation that has its roots in Buddhism)  has further fortified my deep regard for this amazing soul. Some books teach us new perspectives each time we read it. Well, to me this book was one of that kind.

True to all memoirs, Freedom in Exile chronicles the life of the Dalai Lama. And what makes it different is the remarkable frankness of the narrative along with glimpses of the Dalai Lama as a human being, yet, with values firm and steeped in the principles of Buddhism. Named Tenzin Gyatso, he was recognized as the reincarnation of the 13th Dalai Lama at the tender age of 2. He describes the very interesting process of how the reincarnations are found out through a traditional process of discovery which makes an interesting read. Thus at the age of 7 he went on to become the spiritual leader and at 15, the head of state. 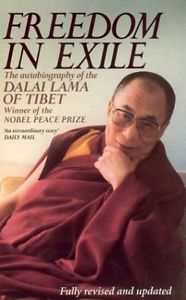 The story extraordinaire reveals the multifaceted personality of the Dalai Lama – his childhood days growing up to be the revered spiritual leader, youthful days which were spent with tutors, his love for repairing watches, the snapshots of Communist China and her encroachments into the sovereignty of Tibet, the rebel uprising, his exile and the travails of leading a government in exile, how he continued to inspire his countrymen even in the face of difficulties galore, his compassion and love for peace – the last being instrumental in receiving the Nobel Prize for Peace in 1989.

Reading the book made me feel so very good that India gave the Dalai Lama asylum. And to the Dalai Lama India is what he calls Tibet’s ‘Arya Bhumi’, or a land of inspiration. Today Dharamsala is where he lives when he is not travelling all over in India and abroad for talks on a variety of topics. Grateful for the warmth and friendliness of India, he is said to have described himself the ‘Son of India’ and has often been referred to as ‘a Tibetan in looks, but an Indian in spirituality’.

As an expatriate, I understand the innate longings one will have time and again for one’s motherland. Each time you go home, you come back refreshed, rejuvenated and inspired. Imagine then a life of being the spiritual leader and head of state of Tibet and not being able to go there at all – in fact, live elsewhere as a refugee! Yet, what captivated me most is that in the midst of all this, he stays positive. Tall order indeed.

So what is the significant takeaway for me from this book?  Be humanitarian. Serve the whole community. Practice the values of forgiveness, compassion and love to all sentient beings. True happiness comes from a sense of inner peace and contentment, cultivated through altruism and by eliminating anger, ill will and greed. “We need to cultivate a universal responsibility for one another and the planet we share, based on a good heart and awareness” (Page 298) says the Dalai Lama, and this is the only way to resolve the problems we humans have created for ourselves.

Needless to say I enjoyed re-reading the book. 5 stars for this one! If you lay your hands on this book, do read it.